Historicizing the Avant-Garde: The 1903 Impressionist Exhibition at the Vienna Secession, by Christian Huemer
09.07.2018 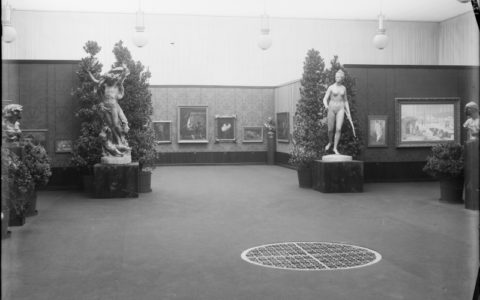 The importance of exhibitions for the production, circulation, and reception of modern art has long been recognized. Nevertheless, out of hundreds of shows organized internationally in the first years of the 20th century only a handful has been studied in more detail. One of them, the Viennese Secession’s eagerly awaited 16th exhibition entitled “The Development of Impressionism in Painting and Sculpture” opened January 17, 1903.1 The president of the Secession, Wilhelm Bernatzik, was largely responsible for the organization of the event. He had once studied painting under Léon Bonnat in Paris and—by Austrian standards—found his way from Naturalism to a local variant of Impressionism at a relatively early time (fig. 1).

The exhibition of the Viennese Secession was perceived as being the highlight or artistic event of the season and was subject to a great deal of attention in news media. In a letter to Paris dealer Paul Durand-Ruel, Wilhelm Bernatzik spoke with great pride—and a certain amount of exaggeration—of “around one hundred articles that have been published here and abroad.”2 After all, the exhibition did manage to attract almost 16,000 visitors. This success in attendance was at least partly due to an aggressive marketing campaign that, similar to today’s blockbuster exhibitions, was accompanied by public discussion of the enormous insurance costs and increases in the value of art works. In an interview with the Neue Freie Presse, Bernatzik recounted that the exhibition brought together paintings from Durand-Ruel’s private collection valued at more than one million francs; one painting, Renoir’s Dancer, was estimated being worth more than 60,000 francs: “It was necessary for a group of insurance companies to take on this risk, and five united for this purpose. The railroad also did not want to take the risk of shipping the pictures in a single wagon—they would have hardly filled a small cart. And so, they were transported here piece by piece.”3

The Viennese newspaper commentators paid particular attention to the process of historicizing the avant-garde. For example, Franz Servaes recognized a “sudden change in weather.”4 Only a short time before, he noted, the young revolutionaries of art wanted to be original geniuses who created a new form of art based entirely on nature, but now they seemed to be making great efforts to establish an “ancestors’ gallery” in order to create a vital connection with the important, highly praised movements of the past. The “pose of the genius and revolutionary” was suddenly thrown overboard and one took up a position, humbly but confidently, in the eternal cycle of art history. The concept of modern art as a process of development was introduced by Julius Meier-Graefe, an advisor to the organizing committee at the Secession. In a pamphlet distributed at the entrance of the exhibition, he states: “If there were really artists […] who resembled nobody before or after their own time, if masters really appeared from nowhere and then departed without leaving traces of their art on others, art would no longer exist.”5

The catalogue of the show divides the 259 exhibits into five sections (fig. 2): Beginning and Development, Impressionism, Expansion of Impressionism, Japanese Art, and Transitions to Style. The old school of painting—consisting of Tintoretto, Peter Paul Rubens, Jan Vermeer, El Greco, Velázquez, Juan Carreño, Goya, Eugène Delacroix, Camille Corot, Honoré Daumier and Adolphe Monticelli—was presented in the first galleries (fig. 3) to make the visitors aware of connections between the French avant-garde and the “great forebears of Impressionism” that could be followed as far back as to the sixteenth century. Jean-Jacques Caffieri, Antoine Houdon, and François Rude showed the beginning in the sphere of sculpture. Impressionism in the narrower sense was represented by works of outstanding quality by Manet, Monet, Renoir, Degas, Cézanne, Pissarro, Sisley, and Berthe Morisot (fig. 4). An individual sub-section, with the title of “Monumental Painting Influenced by Impressionism,” was devoted to Puvis de Chavannes. In sculpture, Impressionism was limited to works by Jean-Baptiste Carpeaux. The majority of the paintings in this section—which was very similar to the Impressionist galleries at the 1900 Paris Exposition Décennale—were provided by the dealers Paul Durand-Ruel (Paris) and Paul Cassirer (Berlin). The organizers of the exhibition united James McNeil Whistler, Besnard, Cottet, Simon, Gaston La Touche, Jean-Louis Forain, Max Liebermann and Max Slevogt, as well as the Neo-Impressionists Seurat and van Rysselberghe, under the catch-all phrase of “Expansion of Impressionism.”

Ver sacrum, the Secession’s journal, advertised the exhibition as a first step towards “presenting Impressionism as a self-contained phenomenon” as previously individual works had reached Vienna only sporadically.6 Emil Heilbut wrote in Kunst und Künstler that “the paintings have been distributed magnificently without any overcrowding— the Impressionists create a sight such as has never before been seen in any exhibition in Europe.”7 The “gallery character” of the exhibition is especially noteworthy whereby the demands placed on the artistic use of space by the early Secession was suppressed to a large extent. That the restrained presentation was intended is also confirmed by the fact that in this case no artist was made responsible for the interior decoration.

Obviously, there are many more reviews to be quoted demonstrating how the show was perceived at the time. In the past there was no other way to assess the significance of a specific exhibition than by skimming through newspaper accounts, correspondence, and propaganda material circulated by the organizers. Today, the proliferation of data on historic exhibitions should allow for properly placing exhibitions such as the 1903 Impressionism show and to address a number of questions in new ways: how common/exceptional is the selection of artists in a specific show? Which networks of people, trajectories of objects, or other patterns can we detect in the data?… And where are the moments in history when innovative artistic movements become canonical? To redirect attention and to challenge long-standing narratives was already one of the goals of Donald E. Gordon’s ambitious documentation “Modern Art Exhibitions 1900-1916.” This 1974 publication in two volumes indexed 851 exhibitions in 15 countries and 82 cities extending alphabetically from Aachen to Zurich and, geographically from Tokyo to San Francisco.8 He systematically assembled exhibition data transcribed from documents scattered in 55 libraries and archives. Yet, the publication of the results in print limited its analytic usefulness. He would have been delighted to see the new possibilities of digital art history!