No Avantgarde without Exhibitions! The Indispensable Platform for Artists in the Early 20th Century, by Raphael Rosenberg
01.06.2018 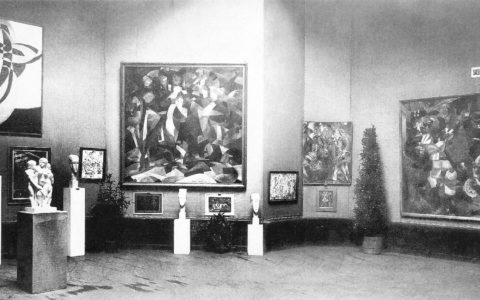 Over the centuries, the status of painters and sculptors evolved to an ever more elevated position. From the time of the Italian Renaissance, the status of the craftsmen was increasingly left behind in favour of a higher one—nowadays called “the artist” —equal to that of poets. In Europe, this shift was more or less completed in around 1800. Visual artists were then recognized as geniuses. This implied that their inspiration would originate from an inner necessity, from the depths of their illuminated spirit. Contrary to craftsmen, artists should not be determined by external influences. Hence they will not seek any commissions. The step from craftsman to artist is a significant ascent when considered from a socio-historical perspective. Economically, however, it holds the danger of a precarious decline of income.

The creation of “art works” from the artist’s inner necessity, as opposed to the execution of works according to an external demand, created a reversion of the supply and demand chain, which placed the artist at a possibly crucial economic disadvantage. For whilst craftsmen waited for a demand (a commission) to produce works, artists were compelled to pre-emptively create supply in order to stimulate demand; an outcome which was never guaranteed.

Prior to 1800, the primary concern for a craftsman-artist was receiving commissions. This was a reliable system so long as supply and demand were balanced, or the quality of their trade was above average. In contrast, after 1800, the economic survival of painters and sculptors became more difficult and more complex. Artists became dependent on a platform on which they could gain recognition and from which a new form of patron, the collector, could buy their works. This platform was the art exhibition.

A significant amount of the artistic output produced since the early 19th century was created with the intention of being presented in an art exhibition. Subsequently, art exhibitions became the place where painters and sculptors earned their stripes. The place where they had the opportunity and were expected to prove their worth as artists and creative geniuses. Art exhibitions became the primary market place for art works where paintings and sculptures could be bought, and a showcase for later purchases of other works by the same artists. Therefore, many exhibition catalogues include not only information regarding the process of buying exhibited works, but also the artist’s addresses, in order to facilitate studio visits resulting in private sales.

The transformation from craftsman to genius artist, or as Oskar Bätschmann appropriately formulated, the establishment of “exhibition artists,”1 is arguably the most significant change in the larger history of the visual arts. An important consequence of this shift is that the quality of the execution loses significance in the eyes of critics and buyers, whereas innovation rises to become the decisive criteria through which one can draw attention to oneself in exhibitions, reach the status of genius, and attract the interest of buyers. Avant-garde artists and artist groups of the late 19th and early 20th century are more keen than ever to stand out as new. Artists were, like it or not, forced into a competition of innovation and this competition took place, first and foremost, in art exhibitions. It was not enough to produce innovative works in the realm of the studio. The avant-garde artists who achieved success were those which exhibited their innovations, and succeeded to convince the public that they were innovative. Therefore, in order to understand the history of avant-garde artists, it is necessary to gain an overview of the art exhibitions in which they took part: where did they take place? Who organized them? Who participated in them? Which works were exhibited, when, and where? What was the public reaction? Which artists and which art works were discussed by which art critics and how? Who purchased which works?

The project Exhibitions of Modern European Painting 1905-1915 creates a foundation that makes it possible to better answer these questions. It started with research into the frequency of Kandinsky’s exhibitions. Christina Bartosch calculated that Kandinsky contributed to 150 exhibitions between 1898 and 1912. From 1904, he exhibited more than once per month on average, despite not having a gallerist at the time who could have dealt with correspondence and shipping. Additionally, it appears that he selected the works to be exhibited in a strategic manner, adapting them to the expected taste at the specific venue. Hence from 1910 on, he would exhibit oil paintings whose subjects are only hardly, if at all, recognizable, but only at exhibition venues explicitly declared as ground-breaking. Yet, Kandinsky is not the first one to paint abstract paintings.

Gustave Moreau2 and Hilma af Klint3 made non-representational oil paintings significantly earlier, but they did not exhibit them in their life-time. Leopold Stolba showed amimetic pictures on several occasions at the Viennese Secession since 1906, at the latest.4 However, according to the current state of our research, Kandinsky is the first one to internationally exhibit abstract paintings, declaring them as a completely new, better, future form of art.5 This strategic participation in art exhibitions was decisive for his success.

Kandinsky is a prominent, but presumably rather typical, case. The success of avant-garde artists seems to have depended on exhibition activity even more than for their predecessors: artists would try to direct the places and the frequency of exhibitions they participate in, and dependent on that, the art works that they show.6 Artists also used a variety of other strategies to promote themselves as progressive geniuses. Many of those strategies are in combination with exhibitions. Artists chose the form, the content, the medium, the size, the frame or plinth for art works and sometimes influenced the design of the exhibition space. Artists used individual texts and group manifestos, and they often published them either in exhibition catalogues or in journals of art movements. Whereby most art movements, such as the many “secessions”, were primarily founded to enable exhibitions. Artists also tried to influence art critics, culminating with Kirchner, who published texts about himself under the pseudonym of the invented critic, Louis de Marsalle. Artists formed strategic networks—they founded local artist groups and fostered international relationships that enabled collective exhibition participation. Artists played with their self-representation in pictures, at exhibition openings, and in their private lives–from conspicuous fashion to an ostentatiously lead, unconventional way of life.

For decades, researchers have brought together material on the history of exhibitions.7 Nevertheless, we are still far from attaining a comprehensive overview. A move towards such an overview is made possible today with the use of databases.8 Our project is limited to a time span of eleven years – 1905 to 1915 – and is restricted to the medium of painting, including the art of drawing. These limitations are necessary, in order to document in as much detail as possible all exhibitions throughout Europe that have left behind catalogues. The time frame was selected because those years see a particularly large number of artistic movements gain public visibility through exhibitions. Nevertheless, the database will provide the first ever comprehensive overview of exhibitions that included European modern artists in the crucial pre-war years at the beginning of the 20th century. We hope it will stimulate novel understandings and research into this time period in ways not previously possible.